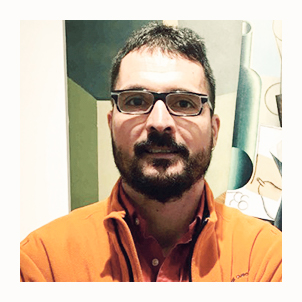 Iván Araujo graduated at the Faculty of Fine Arts of the UCM (Madrid) in 1994, specializing in Calcographic Engraving, and since then, the artist has developed an intense activity in engraving workshops, which he begins to work professionally as engraver and printer, first in EEGEE 3 and later in Ediciones Benveniste. At the same time in his workshop, Iván Araujo works original work, oil, acrylic and mixed techniques on paper, canvas or wood, developing a work of deep symbolic character in which the combination of direct techniques, the investigation of the material and the different supports are characteristic in his way of approaching the image.

In 2001 he decided to leave the university field and open his own workshop in Madrid where since then, he has investigated and edited his work, maintaining that double creative aspect between painting and graphic work. In addition, his workshop becomes a meeting and research space for other artists who investigate the different possibilities of engraving as a group workshop in which teamwork and research produce excellent results. To date he has made numerous individual exhibitions and more than a hundred collective ones in the national and international territory.