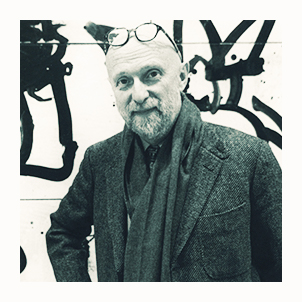 Belgian artist Pierre Alechinsky studies typography and illustration at the La Cambre National School of Architecture and Decorative Arts in Brussels. In 1945, the painter discovered the work of Michaux, Dubuffet and the Surrealists, and became friends with the art critic Jacques Putman. His first individual exhibition is organized in 1947. He meets Dotremont and joins the Cobra movement the same year (Asger Jorn, Karel Appel); becoming one of the most productive members until the dissolution of the movement in 1951. Alechinsky participates in the first International Cobra Exhibition at the Stedjellijk Museum in Amsterdam.

In 1954 he meets the Chinese painter Wallase Ting, who will play an important role in the evolution of his work. In the 1950s, he spent some time in China, and later in the United States; He is interested in Japanese calligraphy and Action Painting, movements that will influence his art in a lasting way. Alechinsky paints on the ground an interlacing of curves, figures, and non-figures, which are often outlined by a frame decorated with little squares filled with narrative or rhythmic motifs drawn in India ink. Since the 1980s, the artist continues his graphic experiments on a wide variety of media.