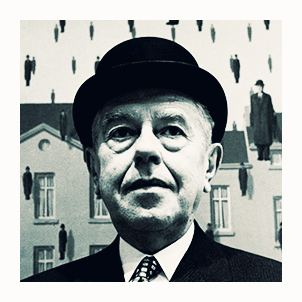 René Magritte (Lessines, Belgium, 1898 - Schaerbeek, Belgium, 1967) was a key artist in the development of surrealism, especially in Belgium, his native country. Between 1916 and 1918, he studied at the Académie Royale des Beaux-Arts de Brussels and began to paint in an Impressionist style. In 1919 he was attracted to Futurism and soon his work turned towards Cubofuturism. The discovery in 1922 of Giorgio de Chirico's metaphysical painting would be decisive for the development of his artistic career.

In 1926, Magritte was the main promoter of Belgian surrealism, a group that made up, among others, Camille Goemans and Paul Nougé, and a year later he traveled to Paris, where he would live until 1930. There he would collaborate in the activities of the surrealist group headed by André Breton, for which he also met Max Ernst and Paul Éluard. René Magritte revealed ""his way"" from the mid-1920s, finding his own language, sometimes with shades of black humor, in a meticulous painting, of a reality that inexorably slides towards absurdity or strangeness, painting that leads the viewer to perplexity and questioning.